MK – re: Louise Whitaker talk on 20th May. MK has found a good venue – Wrights Meadow Community Centre (and they didn’t ask for public liability insurance). MK showed a poster to advertise it – he has sent this to Chesham FT group, the Oxford coalition group, the Methodist circuit and the chaplaincy at Bucks New Univ. People need to register (maximum is 50 people).

SM – will get the e-mail addresses of church offices in Wycombe so that we can try to get the event advertised in their newsletters.

SK – when MK went to a meeting at the BNU chaplaincy, Rev Jenny Ellis (the co-ordinating chaplain at BNU) offered to host an event at her house and we could have a speaker at that too.

MK – we could ask Carol Wills to do this perhaps.

TT – will put the details of the 20th May event on our website and Facebook page and will put “register early as spaces are limited”. On the morning of the event we could e-mail people to ask if they were still intending to come.

MK – JM is trying to get a stall in M & S to coincide with World Fair Trade Day.

MK – JM and MK met the director of SPP, Geronimo. There are now
5 African and a few Asian countries that have SPP producers but
mainly they are in Central and South America. The SPP have given us
permission to put their logo on our directory etc.

The unitary authority for Bucks is due to come into place next year
and JM would like us to create a contact at the council. We could ask
Matt re: the council plans.

MK – in addition to the £250 grant from Christ the Servant King
church, it would be good to have some other income. JM is
investigating the possibility of becoming a ‘Social Enterprise’ group.
I C-S – has suggested that we set up a group e-mail address.

TT – maybe we could do a quiz night to raise funds.

SM – we could do a stall at a Pann Mill event

TT – will give thought to whether local businesses could provide
sponsorship to us.

MK – suggested that we could do something to celebrate WFF being
in existence for more than 10 years.

SK – there is a large board at Sainsbury’s saying they are converting
all their own T-shirts to FT cotton.

Traidcraft have recently had a problem with some ingredients of
some cakes which were labelled as being FT but Traidcraft were told
afterwards that some of the fruit wasn’t FT as the producers were in
the process of re-applying for certification.

BS – the cafe at the bottom of Desborough Avenue has now
changed.

MK – the Grape Tree now has some FT products again.

Book a place at this free talk on the sustainability, environmental, economic and social impacts of fairtrade.

Sponsorship opportunities are available for the 15th International Fair Trade Summit, which will be held in Lima, Peru from 16 to 19 September 2019. This event will be attended by Fair Trade leaders from across the globe, social entrepreneurs, advocates and supporters.

Be recognised as a Fair Trade champion, supporting the Fair Trade movement as key actors gather in Lima to discuss hot topics around Fair Trade. Download brochure to learn how you can support the summit!

Click the image below for details of the country in general (including 3 great videos), the summit venue, the weather, the currency and the transport. 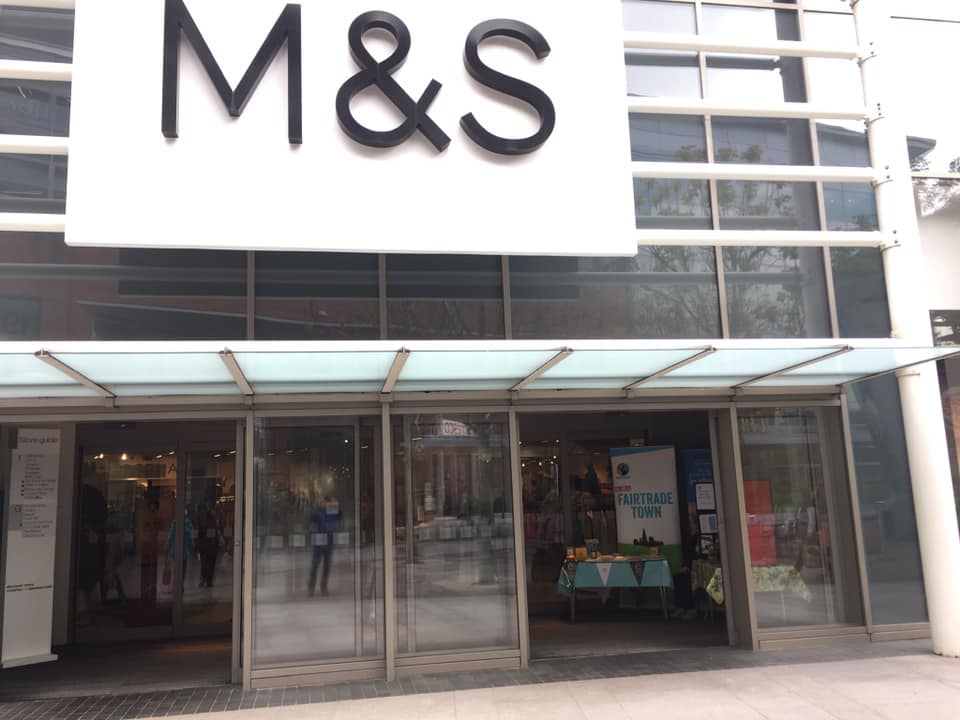 We had a stand in the M&S Eden Store on this day.  Our idea was to let the people know about:

Last Saturday during the celebration of World Fair Trade day, we received a visit on our stand in M&S Eden store from Cllr Matt Knight, who was presented that day as the new Deputy Mayor of High Wycombe. We wish all the best to Matt in his new role and we are looking forward to work with him in all our campaigns in the town.

In the photo above, Matt is carrying a Coffee bag from CoopeVictoria R.L.,the Fairtrade coffee Producers from Grecia, Costa Rica. We are also looking forward to continuing to work with Grecia as a Fairtade town in Costa Rica to have links with High Wycombe, as part of the consolidation of a North-South bridge.

The town of Grecia and CoopeVictoria R.L. in Costa Rica sent us some words to us as part of the celebration and also as part of the links we have been working together in recent months https://www.facebook.com/CoopeVictoriaRL/videos/458133391589632/?t=87

Sunday 12th May – The Pann Mill Open day in the Rye

The video below was recorded when we had a stand at this regular local event.